Rapper/actor Kid Cudi is launching his own clothing line, and naturally it would help his brand appeal if he’s viewed as a trendsetter. That may be why Cudi has decided to roll with the narrative that he started the popular trend of skinny jeans.

Kid Cudi went on Twitter to announce the upcoming launch of his own clothing line, the name of which he didn’t reveal. When a fan wrote that Cudi “already created skinny jeans,” the multi-talented artist acknowledged the comment with “No lies here.” NEWSDaniLeigh Gets Big Love Or Big Shade From Dreezy?

Cudi has been hyped for the release of Malcolm & Marie, a Netflix film starring John David Washington and Zendaya. The hip-hop star is an executive producer of the movie that is already getting award-season buzz. 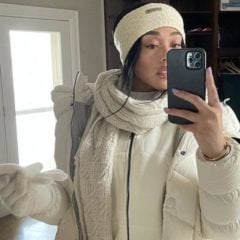 Cudi Cries Over Missing His Family

Kid Cudi went to social media to admit he’s currently dealing with some personal issues and relying on the power of crying to help him move forward. Without getting too specific, Cudi admitted he missed key family members including his mom and daughter.

“Cryin cuz its good for me. Been dealin w some shit lately and needed this release. Miss my daughter, my mom. For anyone goin thru it cryin helps.”

148K Sales In His First Week

The big revelation comes following Kid releasing his Man on the Moon III studio album. Cudi sold 148,000 units in the project’s first seven days of release. This is an all-time opening week high for Cudder, who released the last MotM album back in 2010. Trippie Redd gave a huge co-sign in the comments as well.