Hip-hop and Hollywood mogul 50 Cent is forming a TV production dream team with Kenya Barris, the creator of the “Black-ish” franchise. The pair is developing a Netflix series based on 50’s book The 50th Law, and rap star DaBaby might be fishing for a role.

DaBaby Could Be DaActor In 50 Cent’s New Project

When 50 Cent posted the news on Instagram of his partnership with creative force Kenya Barris, chart-topping rapper DaBaby made a comment hinting that he’d like to be involved. 50 was known to cast rappers in on-screen roles for his “Power” franchise, including Kendrick Lamar and Method Man. 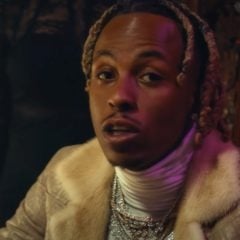 Baby is getting some backlash over his recent “Beatbox” freestyle. The controversy stems from a lyric in which the 29-year-old North Carolina native allegedly called 17-year-old entertainer JoJo Siwa a b*tch. DaBaby rapped, “Don’t wanna get me started, n*gga / Turn me up, n*ggas gon’ see why / N*gga you a b*tch, JoJo Siwa, b*tch.”

“@itsjojosiwa my 3 year old princess is your number 1 fan. I bought her every product you have out. She think she you.

Don’t let em trick you into thinking id ever have a problem with you. My word play just went over their heads.

All love on my end shawty, Keep shinning!” DB went to his social media pages to unload the must-see “Beatbox” visual. The clip features Baby rapping both from a fancy home and an actual gas station as he bodies the song’s instrumental.

“I’m saying that’s how you feel this morning ?? Who pissed you off” -Lil Baby Ja Rule Keeps It 100 On Verzuz Battle + 50 Cent’s Disses: ‘You’re Nothing Without The F**king White Boy’