Before you go too far with it, CB — who is rumored to be dating model Gina Huynh — is said to be good friends with British rapper Skepta, who is also rumored to be Adele’s boyfriend. So even if the late-night visit was more social than business, it doesn’t necessarily mean anything romantic is brewing between the two superstar singers.

Chris Brown and Adele’s friendship is strong. Brown, 31, was spotted making a late-night visit to the British songstress’ house in London last week, according to The Sun. “It was all a bit cloak and dagger,” an eyewitness told the UK publication. “He arrived in the middle of the night and didn’t leave until around 2 a.m.” The visit couldn’t have been romantic, as Brown is said to be in the UK with his rumored girlfriend Gina Huynh. Brown is also friends with Adele’s rumored beau Skepta. (Page Six)

Recently, Breezy came forward to shut down people trying to lump him into the fallout between friend Tory Lanez and Meg Thee Stallion. On his Instagram Story, Brown appeared to take personal issue with people comparing Tory/Meg to his now-infamous domestic attack on ex-girlfriend Rihanna. 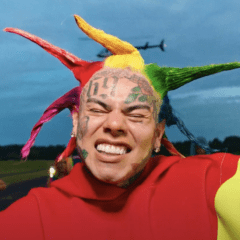 NEWSTekashi 6ix9ine Bounces Back From Hospitalization But Looks Different

Chris’ son Aeko is out here slaying in his baby fashion goals. His proud parents won’t hesitate to share glimpses of their mini-me making all types of fashion statements.

“Ok! The picture speaks for itself 😳 GOD SENT HIM ON PURPOSE! ❤️” -Ammika Harris’ Instagram Aeko’s mother, Ammika Harris, went to her Instagram page with a priceless shot of herself and Aeko. The pic sparked a gushy co-sign and declaration of love from Brown in the comments section.