New York rapper Casanova 2x isn’t letting jail bars keep him from connecting with fans. The hip-hop artist has come forward on social media to speak out on his publicized situation and ask fans what they would have done in his situation.

The Brooklyn native hit up Twitter to reach out to his followers. Casa asked them how they would have handled themselves if placed in his same predicament.

“I always told myself l was never going back to jail…since I’m innocent l turned myself in what would u have done if u was in my shoes???…Comment below” 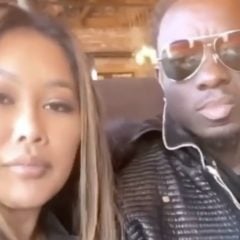 Casanova is trying to keep his head up and his spirits high while he’s behind bars and facing serious charges. The Roc Nation signee was indicted last year for a slew of felonies, including murder and racketeering. While he’s awaiting trial, Casanova 2x remains connected to his wife and children at home. Cas’ wife, model Swaggy Jazzy, recently posted a video of him in jail doing the #JunebugChallenge and keeping a smile on his face.

Casa Opens Up About His Mindset

Recently, Cas shared a screenshot revealing how he’s able to stay sane amid his legal troubles. While Casanova 2x awaits the next step in the legal process, his Twitter account posted a screen grab from a phone call with his kids. Kodak Black’s Legal Problems May Not Be Over Omarion Gets Candid About How He Handles Negativity In His Career