New York rapper 50 Cent‘s vote for president of the United States is not easy to earn. The Big Apple rapper/actor/boss seems to go back and forth between supporting current POTUS Donald Trump and Democratic candidate Joe Biden, and his indecision doesn’t sit well with comedian and ex-girlfriend Chelsea Handler.

After 50 said on social media that he couldn’t vote for Biden because the candidate’s proposed tax plan would turn him into “20 Cent,” Handler publicly asked him to try that political-endorsement thing again. Curtis responded “F*** Trump, I never liked him.”

“👀a what, 😳another spin 💫Fu*k Donald Trump, I never liked him. 🤨for all I know he had me set up and had my friend Angel Fernandez killed but that’s history. LOL @chelseahandler @jimmyfallon” -50 Cent’s Twitter

Fifty recently went to his Instagram page to share a reaction from ex-girlfriend Chelsea Handler saying he used to be her favorite ex-boyfriend prior to the Biden drama. 50 kept his head held high but pleaded to Chelsea not to let politics intervene with their feelings for one another.

“🤦‍♂️oh my God this is affecting my love life now. @chelseahandler I love ya Gator, don’t let Trump and joe Biden come between us girl.#starzgettheapp” -50 Cent’s Instagram

The drama even sparked a reaction from MSNBC news personality Ari Melber. AM asked 50 to explain low-key putting his trust into non-MSNBC sources.

“@arimelber explain 62% to me. 🤷🏽‍♂️I’m packing my bags everybody that has money is gonna move. #bransoncognac #lecheminduroi” -50 Cent’s Instagram 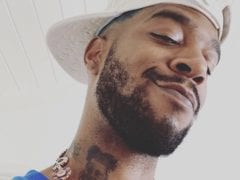 The same week, Fif went to his social media pages and shared a crushing stat suggesting the Biden presidency would mean way more in taxes for him. The Queens native also made a low-key reference to voting for President Donald Trump for reelection. Coincidentally, Fifty recently delivered some epic trolling at Donald’s expense. 50 reacted to reports claiming Trump paid less than $1,000 in taxes during his presidency.