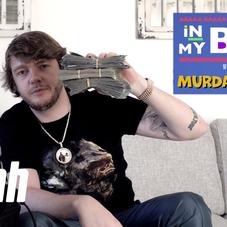 Murda Beatz shows off what he keeps on him at all times during the quarantine, appearing on the new episode of In My Bag.
Quarantine rolls on and, despite it being far less strict than in March and April, we’re still staying home far more often than we used to. Social distance is now a part of our daily vocabulary and our day-to-day essentials have been tinkered with a touch.
Leaving the house, you’ve got to make sure that you’ve got a mask, hand sanitizer, and more necessities on you. That was not the case at the beginning of the year. In Murda Beatz’s case, he’s walking around with a lot of things in his bag, flexing what he’s got on him in the latest episode of In My Bag.
Shooting the new edition quarantine-style from his house, Murda Beatz started off by showing us a huge stack of cash, estimating about $80,000 all kept close together with bands. As of late, he says he’s been gambling a lot to pass the time. Of course, he’s also got his laptop on him, ensuring that he can work whenever that creative wave hits. As one of the most in-demand producers in the world, Murda needs to always be ready.
Interestingly enough, he’s also got some pretty strange things in his bag, including a bottle of sake — he says he’s not really into Hennessy and other typical rapper beverages — his Xbox controller (in case anyone has Call Of Duty or Nascar laying around in the studio), an abundance of white and black t-shirts, cologne, and more. He’s also got some Beats By Dre headphones on him at all times, attributing them to his hearing loss over the years.
What do you think of Murda Beatz’s bag stash? Is he missing anything important?
For more exclusive content with your favorite artists, subscribe to our YouTube page here.