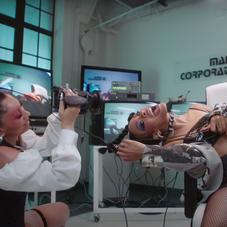 Kali Uchis and Rico Nasty come together to deliver a special treat for their respective fan bases in the form of a new music video for their collaborative track “Aquí Yo Mando.”
After dropping their bilingual banger just a few days ago, Kali Uchis & Rico Nasty have officially complimented their collaborative track “Aquí Yo Mando” with a music video that makes the union between these two baddies feel even more exciting.
Image by HNHH
Acting as the flyest, most dolled-up employees that “Mando Corporation” has ever seen, Rico and Kali make for a dynamic duo in this cinematic story of high fashion and murder. From their eclectic makeup choices to gravity-defying hairstyles that look equally as lethal as the pair themselves, the creative direction seen throughout this video is truly stunning to say the least. As fans of Uchis await a proper follow-up to her 2018 debut album Isolation, and Rico’s followers still pray for her to finally make the crossover from dropping mixtapes to releasing an official studio album, the video for “Aquí Yo Mando” might just be the move that pushes both ladies to expanding their artistry even farther. If anything, can we at least get a joint mixtape between these two?!
Peep the music video for “Aquí Yo Mando” by Kali Uchis & Rico Nasty above, and let’s hope this one leads to more new music from both artists in the very near future.