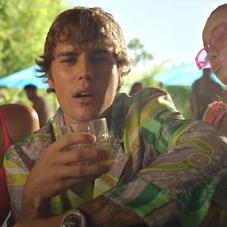 If there’s anyone who knows what it’s like to be a pop star, it’s Bieber.
To say that DJ Khaled was eager to film the music video for “Popstar” is an understatement. The COVID-19 quarantine has kept American citizens from traveling to the majority of the world, making it difficult for Khaled and Drake to reunite. Finally, we’ve received the visual to their hit single “Popstar” and they decided to ask their good friend Justin Bieber to star as the celebrity who has everything at his fingertips.
The music video opens with Drake being bombarded with messages and videos from DJ Khaled as the Miami-based musician attempts to work out their schedules to film the “Popstar” clip. Then, it shifts to Bieber as a pop star who wakes up in a mansion surrounded by women, money, clothes, a stressed manager (Scooter Braun), and security right by his side. In the end, Bieber wakes up once again, this time next to wife Hailey Bieber and tells her that he had a crazy dream that he starred in Khaled and Drake’s video…but maybe it wasn’t a dream, at all. Check out the visual to “Popstar” and drop your thoughts.