Was Lil Uzi Vert blatantly biting Nicki Minaj‘s rhymes, cleverly throwing shade at her ex-boyfriend, or a little bit of both? Uzi shared a piece of a new song on Instagram Story that could be taken as a shot at “Love & Hip-Hop” star Safaree.

Previewing some of his new material, Lil Uzi Vert rapped, “A real bad Barbie / pushing a pink Ferrari / Took that girl to Africa / Got left like Safaree / Yes I got the best b**** in America / Just ask Erica.” The line was viewed by many not only as a reference to Safaree, but also to his wife, fellow L&HH alum Erica Mena.

Or was Uzi just biting? His lines were almost identical to Nicki Minaj’s lines from a “Getting Paid” freestyle 10 years ago. Nicki rapped back then, “It’s going down, down Barbie / pushing a pink Ferrari / I race through Africa / just to see the safari / I am the baddest b**** in America / Slicker than a Jheri curl, just ask Erykah.” 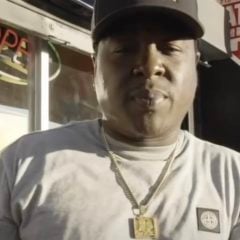 Uzi Vert went to his Twitter page to put a swift end to speculation over him getting close to a mystery woman. Despite looking boo’d and cuffed up, LUV distanced himself from the gossip and called the woman a fan.

“Sh*t old I don’t even got braces … Ya n*gga wear bandannas when he get dress. … I don’t f*ck with that girl that’s it. … That’s not my girl wouldn’t lie never did nothin but that #justbeingUzi she cool tho but that post was lame suppose to keep that” -Lil Uzi Vert’s Twitter

The Internet initially started to wonder if Uzi had found himself a new ride or die. Pics surfaced and scattered across the Internet of Vert getting extra comfortable with the fan.