When the rest of the world found out a couple of years ago that hip-hop megastar Drake had a baby, naturally one of the first questions was, “Who is Drake’s baby mama?”

The answer to that question would be Sophie Brussaux, a visual artist and former model originally from France, with whom Drake had a brief relationship around 2017. Their child, Adonis, turned three years old this month and is already so popular that when he’s featured in one of his mother’s Instagram posts, it’s an automatic six figures in likes.

Sophie Brussaux’s profile has of course gotten bigger now that the public knows her connection to Drake, but there’s still a lot that fans and followers don’t know about the 6 God’s baby mama.

1. Sophie Brussaux Is A Painter

From portraits of historically famous figures to politically-driven abstracts, Sophie’s art has captured the attention of aficionados across the globe. In 2019, she met Pope Francis and gave him a portrait that she’d painted of him. She’s done pieces on the Obamas, Muhammad Ali, Sophia Loren and Frida Kahlo, among others. On her website, Sophie describes her art as combining “her fascination for culture and social paradigms with a love of colorful pop-art and symbolism.”

2. She Started A Non-Profit Organization For Artists

Sophie, 31 years old, is a co-founder and Chief Visionary Officer of ArtsHelp, a non-profit organization that develops projects and programming for artists to impact social change. The organization works with artists all over the world. 3. Sophie Brussaux Used To Go By The Name Rosee Divine 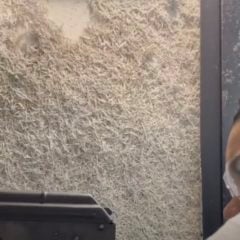 WATCHYoung M.A Busts The Draco Off At Shooting Range

4. She Has 2 College Degrees

5. Drake Has Mentioned Her In Songs

In the song “When To Say When” from his Dark Lane Demo Tapes mixtape released earlier this year, Drake mentioned Sophie Brussaux — not by name — in a line that drew some controversy. Drake rapped, “Baby mama fluke, but I love her for who she is.” The lyric was criticized and seen by some people as disrespectful and dismissive of the mother of his child.

By all accounts, Drake and Sophie Brussaux only hooked up a few times leading up to her pregnancy, and they’re definitely not a couple today. After the existence of Drake’s baby became public knowledge — thanks to rapper Pusha T revealing it in a diss track about Drake — and Sophie entered the public eye, it was then revealed that Drake wanted her to get an abortion. While Adonis’ parents are not together, they have learned how to co-parent. In LeBron James‘ HBO Series, The Shop, Drake said,