Everybody had it wrong about hip-hop icon MF Doom. After years of outlets, media, and the general public reporting and celebrating his birthday as January 9th, the truth has come to light.

With a little digging from past, it’s been revealed that Doom’s birthday fell on the 13th of July. Looking at the case from a 1998 arrest in Baltimore exposed his real birth date.

“Whether by intentional deception (rapping “Circa one nine seventy-one, on the mic machine it seems his work will never be done” on the DANGERDOOM track, “Pretty Hair,”) or mere oversight on our part, it appears MF DOOM, born Daniel Dumile, kept his actual date of birth off (most of) the books. In fact, it wasn’t until today that we discovered a thread on Reddit disputing the widely-accepted birthday of DOOM. The first bit of evidence points to the rapper’s appearance before the US Senate in a hearing on voter registration from May 28th, 1991. During his testimony, the rapper (then going by Zev Love X,) claimed to be 19, which would nullify January 9th as a possible birthday on its own. But the thread also cites a pair of charges from a 1998 arrest in Baltimore. Naturally, we looked up the case stemming from his arrest, revealing Dumile’s actual birthday to be July 13th, 1971.” (okayplayer) New York rapper Busta Rhymes recently went back in the day. The hip-hop veteran went online this past weekend to take a major flashback to a joint concert with the late MF Doom’s rap group and his own Leaders of the New School. Rhymes went to his Instagram page with the must-see shot showing a flyer dating back to the early 90’s and showcasing both rap groups headlining a New York City show.

“LEGENDARY!!! KMD (MF DOOM’S ORIGINAL GROUP) , LEADERS OF THE NEW SCHOOL, CURIOUS GEORGE!! 30 YRS AGO !!! I HOPE A LOT OF YOU WILL BE ABLE TO CELEBRATE MILESTONE MOMENTS 30 YRS. FROM NOW!!” 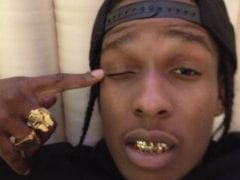 This past weekend, streaming powerhouse TIDAL went to its social media pages to make a big announcement. TIDAL shared footage showing off an actual augmented reality camera filter in use to celebrate MF Doom’s 50th birthday.

“Use TIDAL’s MF DOOM AR filter to celebrate his life and legacy on what would have been his 50th birthday.”

The Legacy Lives On

Over the past few days, MF Doom tributes have surfaced across the Internet. The painted shots are shown across trains in Belgium. Last week, pics surfaced showing the epic shots. Some pics feature Doom’s mask spray painted black and grey onto a Belgium train.

Jeezy Reminds Everyone – Including Gucci Mane – He Won The Verzuz Battle