It’s been almost two whole years since West Coast rap icon Nipsey Hussle was killed. Before he passed, Nipsey left a legacy in the form of his son, Kross, the product of his relationship with his actress Lauren London.

Four-year-old Kross (Nipsey Hussle’s son) and his brother Kam (Lil Wayne‘s son) were recently at the birthday party for rapper OT Genasis and reality TV star Malika Haqq‘s son, Ace. After OT posted a video of the kids, fans couldn’t help but notice how much Kross looks like his late father. 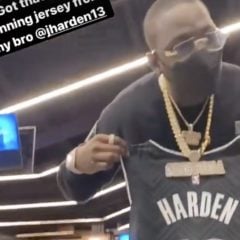 NEWSBobby Shmurda Gets A Warm Welcome At Nets Game

Lauren London is serious about her PUMA lifestyle. The popular entertainer recently lit up social media with some fresh looks at herself donning fire gear from the iconic brand.

Twitter recently picked up on a rumor suggesting Lauren London was pregnant. The mother of two — she has a four-year-old son with late rapper Nipsey Hussle and an 11-year-old son with Lil Wayne — strongly denied the rumor.